Indie film-makers everywhere, consider yourselves warned. Beyond Black Mesa is raising the bar in Birmingham. 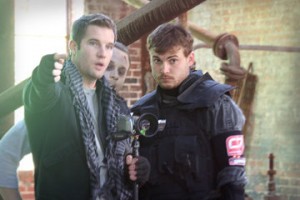 Now, even better… how many times have you decided to answer your own question?

Thats exactly how Beyond Black Mesa went from an awesome idea to a short film.

With nothing but the help and goodwill of his friends, Brian Curtin was able to turn his “How awesome would it be if ______?” into “How awesome is it?!”.

After Concrete Hustle was accepted to 2008 Sidewalk Film Festival and premiered in front of about 150 people, Brian Curtin, Matt Hall and Mat Powell decided to begin their next project. Since then, their first film has reached over 1.6million viewers on YouTube, where the audience and inspiration continues to grow.

It’s often difficult to explain Beyond Black Mesa to someone in a paragraph, especially at the risk of sounding like a nerd. How do you explain a sci-fi / action / thriller short film side project?

Here is our best shot:

Inspired by the Half-Life Video Game series, Beyond Black Mesa is an action-packed short film centered around Adrian Shephard and of a band of resistance fighters who are struggling to survive in the post-apocalyptic world. When an army of Combine soldiers implement an elaborate plan of attack to rid the rest of those who remain, the resistance must warn the other survivers of the mass invasion, or face the reality of the extinction of the human race.

With that, and a skeleton plot, the group of three indie filmmakers set off to convince a few others that this film was a good idea. Through pure goodwill (and strong friendships), they didn’t have to twist anyone’s arm too much.  Nate Quarterman made music for the film from scratch. Joy Gravel lent a hand in acting and public relations, but as the director’s girlfriend, her most important contribution was maintaining her composure while Brian spent not just countless hours,  or days at a time, but often spent entire weekends on post production. Andrew Gothard and Walt Thomas were the helping hands when the plot called for a dead guy to lay in a dark corner for an hour, or a zombie to jump from a 7 foot balcony through at least eight different takes.

Brian, Matt H. and Mat P. spent nearly $1,200 of their own hard-earned day job money on costumes, props, equipment, sound effects and music. We can’t even fathom how many hours were sacrificed to make it happen.

Over two years in the making, this film is the product of an idea that sparked a project, full of out-of-pocket expenses, home-made dollies, and endless hours of hard work that the crew never really had to spare to begin with.All in all, Beyond Black Mesa pushes the envelope for the expected quality of home made action films, combining visually stunning special effects with *gasp* actual action content.

Just like how Rome wasn’t built in a day, this film took time. It makes you wonder what Rome would look like if the legendary Romulus worked a full-time job as an art director and had to build the city on his own budget.

How awesome would that be?